I would like to demonstrate my excitement for Vegas by smashing my face on the keyboard a few times, which I will now do:

The Mountain West Conference tournament begins this week, which means The Road Show is in full effect. Thousands of SDSU fans are on their way North East to our vacation home of the Thomas & Mack Center to defend our back-to-back championship titles.

Are you aware that SDSU has won the last 2 MWC Tourneys? YOU ARE NOW. Did you know we’ve won 3 of the last 6? NOW YOU DO. We seriously run that city.

So what does that mean for you? Well, if you’re reading this, odds are you already have your plans for this weekend and have prepared your livers, made your peace with God and loaded up your cars with as much 4Loko as you can legally transport across state lines. You’ll be in Vegas. You’ll be at the games. And you’ll be drunk. Honestly that’s all we need out of everyone.

But there is strength in  numbers. So here is our tentative schedule of events for the weekend.

What, you’re not coming into town Wednesday night? What the hell’s the matter with you? APOLOGIZE FOR NOT PARTYING IMMEDIATELY. Nothing firm happening, other than getting drunk and imposing our will wherever we see fit. YOU’RE GOING DOWN, LIONS AT THE MGM GRAND. (puts on Zuma costume) (punches MGM lion in the face.) WE RUN THIS TOWN, BITCH.

We play at noon. Yes, apparently Vegas has a noon in the morning. But fuck it, this is no time for softness. Be in the T&M parking lot about 10am for tailgating and marching into the arena together. BROTHERHOOD. We play Boise, so try to find a reason to care. Pretend Anthony Drmic is the reason your first dog died. I HAVE YET TO SEE PROOF THAT THIS IS NOT HIS FAULT.
Post-game Thursday, stick around to watch the CSU/TCU game to see is next up on the Aztec Destruction train, rolling into Las Vegas Station. WHOO WHOO, THAT’S THE SOUND OF  MURDER COMING YOUR WAY.
Thursday night? Get your self a nice meal off your winnings from betting on the Aztecs that morning, then hit the craps tables with us at Bill’s. WE ARE NOTHING IF NOT CLASSY AS FUCK.

One word: Blondie’s. This sports bar at the Miracle Mile shops in Planet Hollywood does all-you-can-drink happy hour from 3-6. We play at 6, that means 2 hours of SDSU students and alums drinking all they can. WE ARE PUTTING THIS PLACE OUT OF FUCKING BUSINESS AND THAT IS A PROMISE. We dominated this bar last year and it was awesome. Alums buying beer for students. Everyone singing and chanting and generally dominating. Trust me, you don’t want to miss this. BE AT BLONDIE’S BY 3, YOU GUYS.
After the game Friday, we’ll all probably be comatose. Which means time for a short nap. Then get the fuck up, have an Earl of Sandwich. Take a shower and put on your ballerest outfit. HIT THE CLUBS AND OR BARS. SKINNY TIES AND SKINNIER BITCHES.

CHAMPIONSHIP DAY. Get to the arena by 1 PM. “But the game doesn’t start until 4pm!” WRONG, COCKASS. The men’s game is at 4, but the Lady Aztecs will be playing for the crown that day too. It’s not optional that you are in attendance for this. It is mandatory. Anyone caught coming to only the men’s game on Saturday will be branded as permanently soft and shunned.
After we have swept the men’s and women’s tournament championship (after already sweeping the conference regular season championship, player of the year and coach of the year awards. HOT DAMN WE WE ARE FUCKING GREAT) it is time to bask in the glory of our achievements and take part in what as become a tradition after winning these tournaments. Reenacting that scene at the end of Oceans 11, smoking cigars outside the Bellagio. Bonus points for singing about America.

No one likes us. We don’t care.

AND WE. WILL. BE. VICTORRRRRIOOOOUUUUSSSSS.

This weekend, is Vegas.

Our beloved Aztecs hit the road to play some shitty team we dominate every year and it is your DUTY — not your right, not your option, YOUR DUTY — as a Showman (or Showgirl) to get your ass up the 15 and back up your university.

Now, as a disclaimer, this is only the second-biggest Vegas trip of the year. The Mountain West Tournament in March is a much bigger deal. Why? Well we’re playing for a championship and get to play other teams, not just stupid shitty UNLV, They suck and are bad and are not good so beating them gets kind of old.

Ok, maybe it doesn’t get old.

Anyway, back to this weekend. We gon’ drank. OH WE GON’ DRANK.

And while alcohol consumption is important, there are other things to remember. For instance, did you know gambling is legal in the city of Las Vegas? It’s true! And if you’ve been betting on SDSU in our trips to Vegas in recent years (like we have) then you are a person of sound financial decision-making. Bet the Aztecs and bet BIG. When we go to Vegas we don’t just beat their team, we take their money and sex up their women and vomit on their sidewalks. HAIL!

You may be reading this and thinking, “Damn, I wish I woulda gone on this trip.” THERE”S STILL TIME, ASSHOLE. Seriously, short of your parents being killed, causing you to eventually become Gotham City’s only hope for justice, there is no excuse for not coming.

Got work? CALL IN SICK. Broke? PILE INTO A CAR, SPLIT GAS AND MAKE IT A DAY TRIP. No tickets? THERE ARE SCALPERS GIVING TICKETS AWAY FOR CHEAPER THAN FREE FISH TACO COUPONS.

If you’re now reading this and feeling guilty for not going. GOOD. We’re all ashamed of you.

We’ll be tailgating pregame because other than shouting and being offensive, drinking in parking lots is what we do best. Follow us on Twitter (@The__Show) and we’ll let you know our exact location that morning. One word of advice though, make sure you bring your own 4Lokos from California. Nevada 4Lokos taste of losing streaks and inferiority.

There is one mantra that matters when we are on the road: “No one likes us. We don’t care.” Of course we own that building, so there’s some debate as to whether this is a road game or not.

Regardless, get ready to get drunk and get rowdy. It’s Vegas. And WE WILL BE VICTOOOOORIOUS.

A Time for Hate

This is gonna be the the best game ever.

San Diego State doesn’t have a rival. Or at least, it hasn’t for about a decade.

“But what about BYU? We all hate BYU.”

First of all, everyone hates BYU. We’re not special. That’s like saying our rival is traffic, or Mondays. Also, BYU already has a rival. It’s their more infinitely-more athletically successful state-mate, the Utah Utes.

Football schedule-makers have had us play UNLV on “rivalry week” for the past few years, but again, UNLV already has Nevada-Reno as their rival. We’re just the guys who kicked the shit out of them in basketball 8 of the last 9 times. (Four of those wins came on their home court of the Thomas & Mack Center, otherwise known as “Viejas North”, The Show’s official vacation home.)

So we’ve been rivalless (WORD?) for far too long, BUT NO MORE. This Saturday we rekindle our old WAC rivarly with Cal State Fresno. (They may call themselves Fresno State, but we will always refer to them as CSU Fresno.)

But what do we really know about Fresno? Well here’s a brief history: The city of Fresno was founded in 1978 by a group of racist puppy-eaters who were kicked out of Chico State for not being able to keep up with the rigorous academic course load. They decided to form a school in the mid-80’s as a front for their lucrative crystal meth business. At some point, Trent Dilfer went there. It’s also where Ryan Matthews perfected his gold medal-quality fumbling ability. Today, Fresno is world-renown for being the home of Keven Federline and meth. Did I mention the meth?

And here we are. Now we welcome these subhuman mutants into America’s Finest City in a battle for CSU bragging rights, oh and also an antique oil can for some reason. Whatever, could be worse.

But why should we waste energy hating these worthless cretins? Well for one, they think they’re better than us. No, really. Their basic attitude is, “Fine, keep your hot girls, perfect weather, delicious food, incredible nightlife, hot girls, professional sports teams, hot girls and beaches. Our football program is still better.” 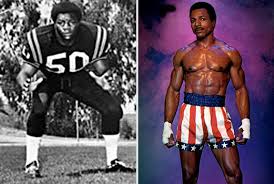 No, seriously. Apollo Creed is an #AztecForLife.

All Fresno State has is David Carr and diabetes. ADVANTAGE ZUMA.

Rivalries are what make sports – especially college sports – awesome. And I would argue that unbridled hate is the healthiest human emotion. So on Saturday, it is your duty as an Aztec to make your way to the Q, get irresponsibly drunk and hurl vulgar, possibly nonsensical insults in the direction of anyone wearing Bulldog gear.

Get yourself a crate of 4Lokos, set up camp at B2, bump Uprising on repeat and chant “RONNIE FUCKING HILLMAN” until it loses all meaning because FUCK FRESNO. WE ARE THE SHOW AND WE WILL NEVER APOLOGIZE FOR PARTYING .